Game mode: Build
There are no killings, only construction (the name says it :P)
There is a glitch in which is that you can destroy unbreakable blocks (I will not say how it is done) but in this script that glitch/bug does not work.

Commands:
/claim: Claim a sector (you can only claim 1)
/sector: If you are far from your sector and want to teleport to your sector, just use this command.
/removeclaim <player>: (only for administrators)
/ask <player> <question (optional)>: Ask the player if you can destroy their blocks.
/allow <player>: Allow a player to destroy your blocks.
/remove <player>: Revoke the player's permission so that he can no longer destroy your blocks.

/claim:
How to use it: You must put the command /claim and choose the place where you want to have your sector, if you want to choose the color of your sector you should only change the color of the block you have, once you have chosen the place and the color only you should hit the block that is at your feet.
-The claim will not work if you choose a sector that is in the range of another sector, you must ecoger a good sector.
-The default of the size of a sector is 20x20 cubes, no one can place or destroy any block that is within your sector (claim) either up or down (it could be said that your sector has the shape of a perfect quadrangular prism)
-If any player has permission to destroy your blocks (/allow), anyway he will not be able to place or destroy any block in your sector since the sector is only for you but  he can break your blocks that are outside your sector.

-If you want to change the size of the sector per player (I do not recommend it) you must open the script and in line #15 (RANGE_CLAIM = 10) you must keep in mind that the number you put in RANGE_CLAIM will be multiplied by 2, suppose that you put 15:
RANGE_CLAIM = 15
therefore the sector size per player will be 30x30 blocks (cimetric base).

/sector:
How to use it: You must put the command /sector and you will automatically teleport to your sector, this can be useful if you are in another place and want to return quickly to your sector.

/removeclaim:
How to use it: You must put the command /removeclaim <player name or #ID> (example. /removeclaim MegaStar)
-This command will allow you to remove the sector of a player, keep in mind that when removing the sector of a player, that player can choose a sector again.
-If the <player> does not have any sector, the command will not run and the script will send you a message saying "the player (player name) does not currently have a sector."
-This command can only be used by administrators.
-If the sector of the <player> is removed successfully, that sector will count as null, therefore they will be able to build and destroy since the sector will not exist.

/ask:
How to use it: You must put the command /ask <player name or #ID> <question (optional)> (example: /ask # 2 can I help you?)
-If nothing is passed in <question> the default question will be "can I destroy your blocks?".
-When the command is used, the <player> will receive that message and decide if he will let you destroy his blocks.

/fly:
-To activate/deactivate the flight 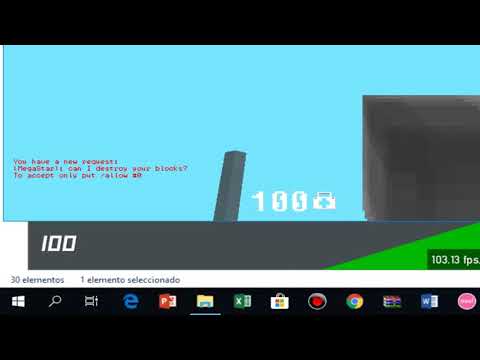 Caution:
-I recommend that the commands: /box, /db, /df, /dw and /wall should only be used by the players that are trustworthy to you, this will avoid the misuse of commands.
-I will put the map I am using in the video (the map is great for a build server) along with the scripts + a config.txt that you can use it on your build server, you just have to change the passwords.

The commands /paint, /rapid /gr(gradient commands) and /sculpt can be used by any player.