Hello, my fellow players out there who are reading this thread right now.

First off, to start with, I want to say that “TeamCamper” is not the IGN I have used to play on the Aloha.pk servers while I’ve been banned approximately about two to four days ago - I’m sorry, I don’t remember the name I used when I got banned on your servers.
To tell the truth, I’ve changed my name for about three times since then, because I was thinking that other players from your servers might also play on other servers where they would suddenly recognize me and get me banned too. Sorry for that. I honestly regret it, now that I saw what’s most likely happening to me then - I wish I could revert my actions on your servers.

1) Votekicks last only 30 minutes. Did you wait at least 30 minutes to make sure your “ban” is not just a votekick?
Yes, I know how the so-called “Votekicks” work, because I was put into one before (although just for a kind of stupid reason); but on a different server, which isn’t connected to Aloha.pk servers in any way - Except all of 'em are for the game Ace of Spades.

2) What is your in-game player name? Please include it in the subject of this topic as well.
My actual IGN is “TeamCamper”, which will stay like this from now on, because I don’t want to cause any confusion about stuff like this again - y’know, this name fits best for me, because I like camping in - most of the time - one place. To be honest, I’m quite good at this game, so I don’t really know how I came to the use of this hack. Probably my cousin who made it just too interesting for me to use.

3) What server were you playing on when you got banned? Reminder: We can only help you with bans that took place on aloha.pk servers.
I believe I have been banned from one of your following servers (sorry that I can’t specify a certain server…): Hallway, Tower of Babel, or Arena - I apologise if it was none of those, I can’t remember.

4) Why were you banned? Lying severely decreases your chances of getting unbanned. If your “little brother” got you banned, tell him to make an appeal, or accept responsibility on his behalf.
I know that I have been banned for using the probably well-known Aimbot hack, which wasn’t okay to do. I do know that hacking wasn’t allowed on your servers, yet I still used it. I didn’t really think about using it before either, until my younger cousin told me about it (I did just hear of it a few times before). I can’t actually say if my ban was caused by a votekick (and maybe another ban when I possibly tried to rejoin - which is, like stated by Reki on one of the information topics in this sub-forum, most likely happening), or if it directly has been a permant ban by one of the server administrators, moderators or guards…
Again, I’m truthfully sorry that I’ve been hacking in such an awesome game - I spent like the half week playing it again and again, and I can’t really stop!

I’ll promise that I’m not gonna use this hack on your servers again (and not on the other servers too, since I know what’s probably going to happen with me). I really want to play on the Aloha.pk servers again, because they are great and awesome, and have a very friendly community in general.
I hope all of you can (and will) forgive me for the problems I have been causing - it’s not happening again.
And in case it would, at some point, happen again (for any reason, I don’t know), then I know that there won’t be a high chance of getting unbanned again to continue playing on your cool servers.

6) When were you banned? Best approximate date and time, please.
For the point of the date/time, I can certainly say that it happened this week, possibly during the last three or four days.
If I have to be more specific about it, I’m really sorry, because I don’t have any more precise information about it - forgive about that.

Here the picture of what comes up when I join any of the Aloha.pk servers, not just the one with the Tower of Babel mode: 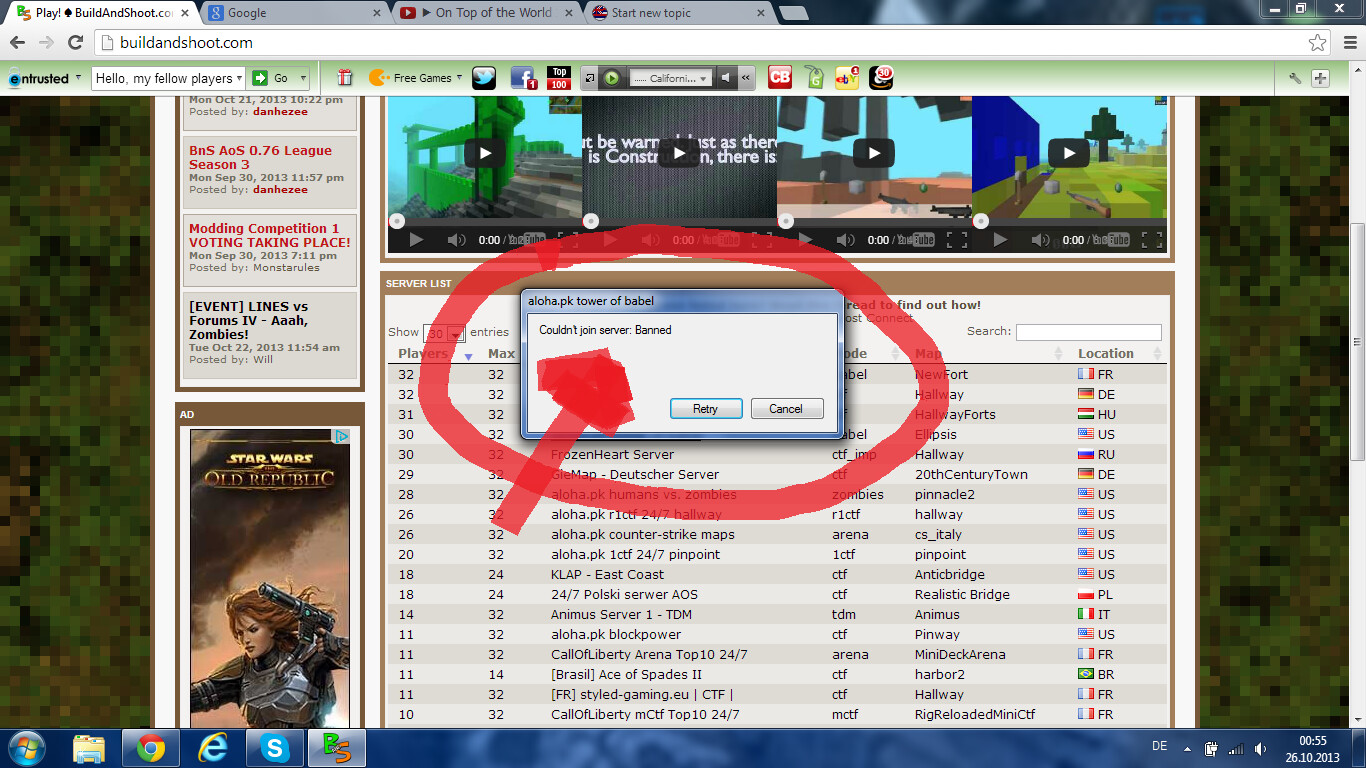 (If the picture won’t show up, here’s a simple link to it on Imgur: http://imgur.com/yIumevF)

Well, to finish this ban appeal, I hope there will be some people commenting on this, and,my wish is that it will be accepted - but that doesn’t lay in my hands.

Good day (well, for me it’s already dark night, but whatever :P). 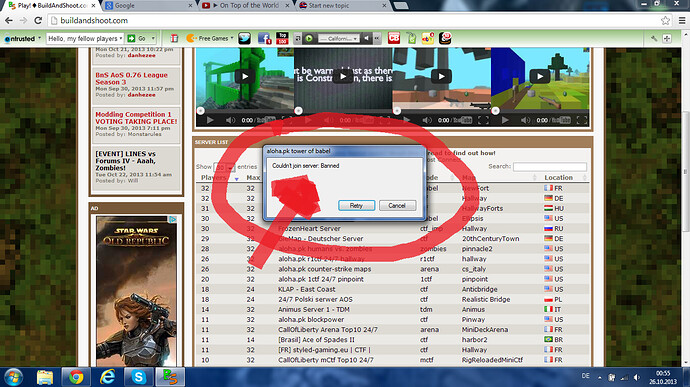 You were actually banned today, not 2 to 4 days ago. Answer me this, were you hacking today?

Oh. I honestly thought that it was a bit of time ago, but I guess I messed up two several timespans… Sorry for that.

Well, I believe I did, because when you checked it, and it said I got banned today (which I still can’t quite seem to agree with), then yeah, I have been hacking then. I structured my whole appeal after the belief that it had happened about three days or so ago.

And when it happened - after your understanding - not so long ago like I said, then it could still be “yesterday” for me because of possible timezone differences. Even if it’s just a small timespan, it still makes some difference to my post, 'though I messed up the times a bit.

Thanks for replying though.

P.S: And does it really make such a big difference (I mean the time when I have been banned)?

Has everyone forgotten about this?

I wanna play with ya’ll again.

Thanks for this bunch of replies I got… -.-

Here’s a reply. I banned you for hacking without the knowledge that you actually evaded.

I don’t see that you’ve ‘learned your lesson’ yet.