Guys if I will not go more on aos, it was one of the most beautiful games I’ve ever seen so far, I’ve been playing since 2012, that friend of mine who was up there advised me, but it was one of the most beautiful games that I I have known. Anyway, I know, I made a bullshit that day. Now maybe you say, but now he says this because he wants the unban, if you want to do it, otherwise I’ll always be active, even if I do not play with it.
What should I say … Good game and never give up !! Happy New Year

i did not understand most of what you said but kk

Lel… Cheater? I used it only that day… Jesus that girl

yeah and that one day got you out for life

I made a bullshit that day, happy new year

You will be forgotten within the midst of the archives. Bye, cheater.

Wait… Are we supposed to feel sorry for you??? Because I don’t. You got banned for hacking, got it appealed and then evaded it by playing in aloha.pk servers and getting a perm ban. Plus you’re a hypocrite because you often complain about hackers, and then you downloaded some and used them.

See ya later (DONT COME BACK)

Shame you ended up like this, VoX. And this all could’ve been prevented if you had just asked an admin or joined our Discord.
Either way, Ace of Spades “isn’t the only game that you have, so… have a bad day” and don’t repeat this mistake anywhere else.

However i was not hacking, i was testing, this guys dont understandbecause i am probably autisticLel noah… I domt want to lose times with u

Perhaps there is a chance for you VoX, if you take several months off and make an appeal and are sincere for your mistakes.
An apology to many, may go a long way, and who knows you may be unbanned if you are sincere enough with it.
I don’t want to give a hope which may be false, but it may be worth a try if you wish to play this game again.

Remember, the only ones who are welcomed to the game are players and not cheaters or griefers.
Goodbye VoX, I hope you think of your decisions and you actions and do not repeat your mistakes elsewhere.

Fun fact: This post clearly shows that you were caught hacking: http://aloha.pk/index.php?topic=10189 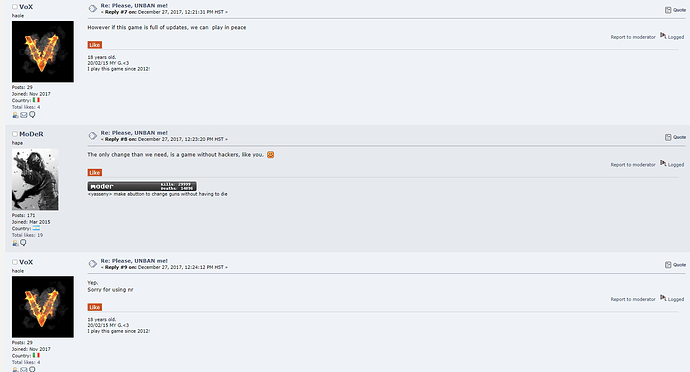 btw, if you only wanted to “test” hacks you could have just made a dedicated server on your pc and join it.

Testing Hacks is not permitted on any aloha server, period.