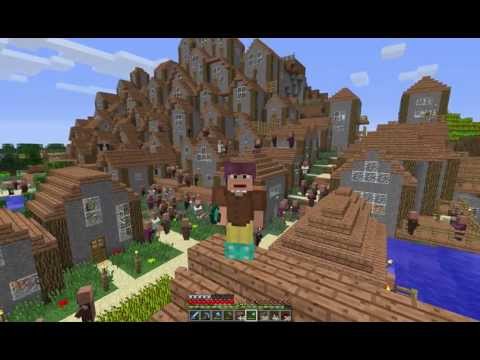 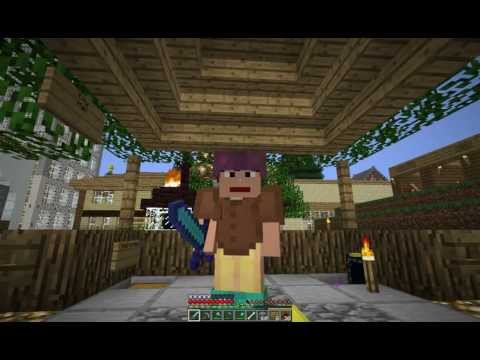 Had a small villager riot today:

They probably don’t like the genocide machines I got installed in a few houses.

I think its amazing what you did to that place. Villagers are very hard to maintain and keep them from doing stupid acts that kill themselves.

Yeah well… in some way my village keeps on producing villagers, so I don’t really mind anymore if they fall from a cliff or anything. The situation was out of control before I had my genocide-machines working.

So what is the genocide machine?

Some houses have lavatraps… and they’re standing in line to get in there.

I also got houses in a ravine, and apparently the location of this part of my village and its distance to the centre of my village causes a glitch to let the villagers breed infinitely. I had way more villagers than I had doors. I’m not gonna demolish all the houses in the ravine though, so instead I just kill villagers at a constant rate.

Haha, at first I thought that each house was individual and separated from one another but then you showed the interior and I was like 'D’aw…" But it’s cool either way, though the interior of the town looks somewhat messy. xD OnceI get a better comp, I’d probably start playing minecraft again and I’m also going to try and complete a city/town/settlement. Hopefully, as epic as what you could make.

Tried getting there on my laptop…I lagged like hell. Note to self; Don’t play Minecraft until new desktop arrives…

Seeing it person, it is sooo much more than I expected.

Speaking of not playing on one’s laptop, mine crashed last night but thankfully, half the parts for my brand new DIY pc is here, second half tomorrow. Cant wait to crash the server with my awesome FPS(expecting 500)

If I couldn’t breed my own, i might have been tempted to buy some of your villagers off you to fill job positions at my stadium.

Tried getting there on my laptop…I lagged like hell. Note to self; Don’t play Minecraft until new desktop arrives…

yeah that happens to a lot of people, sadly.

Your genocide machines are too op, fell in one today :’(

I think we should each have 10 arrows and have a competition to see who can kill the most villagers from a distance.

Do you have golem spawning?

Do you have golem spawning?

It’s still a work in progress but BR asked for some screenshots so here you go, my item sorter.

Got three levels in total with a station level on top of it. A total of about 250 items and every item has about three chests that can be filled. When an item is delivered to its chest or when all chests are full the light above the chest will go on. 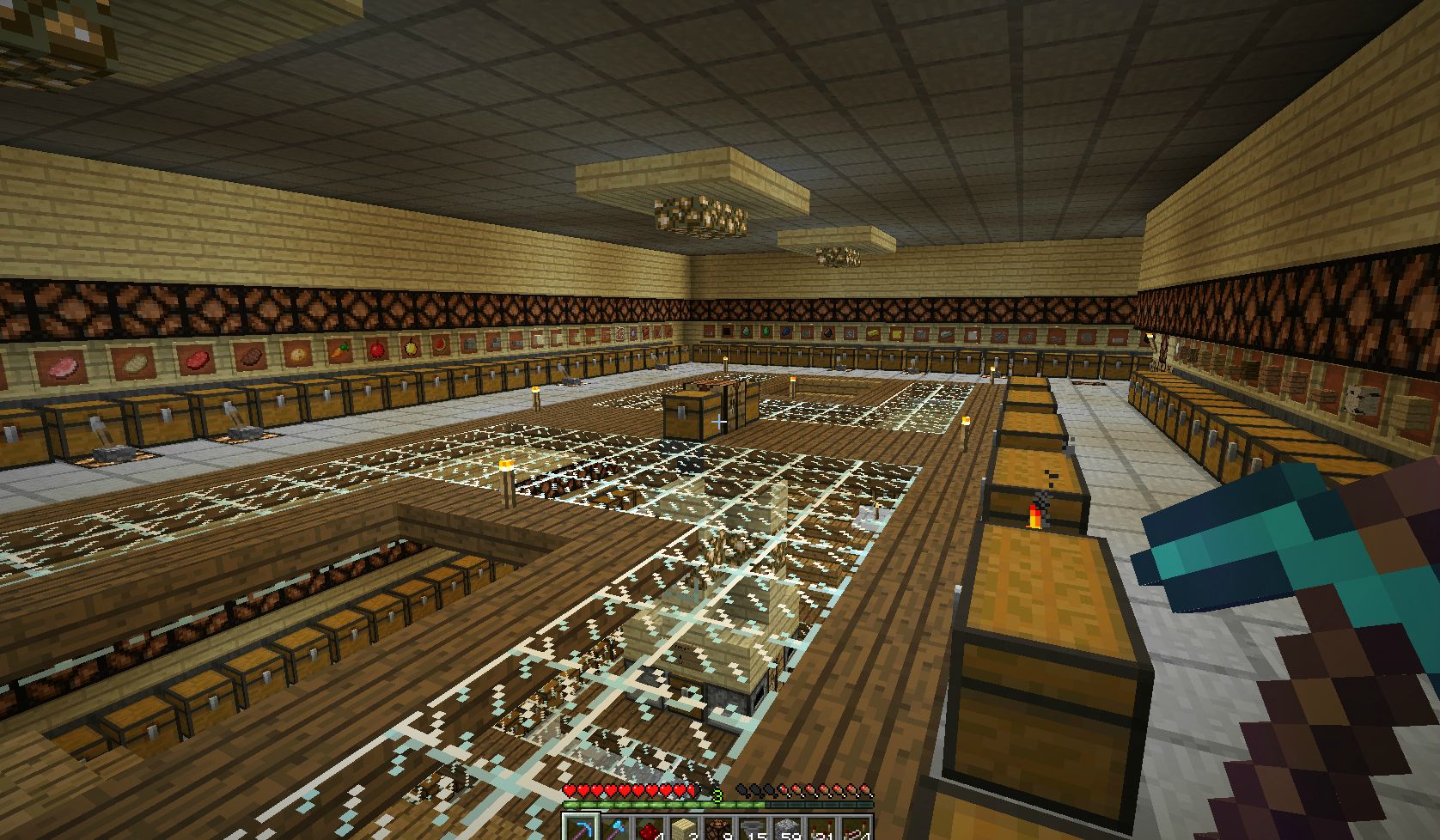 The levers you can see near several chests on the left can move stuff from these chests to the automatic smelting system. All processed stuff gets delivered back to the right chest. If the automatic furnace is active a light (you vaguely can see in the background) will go on. 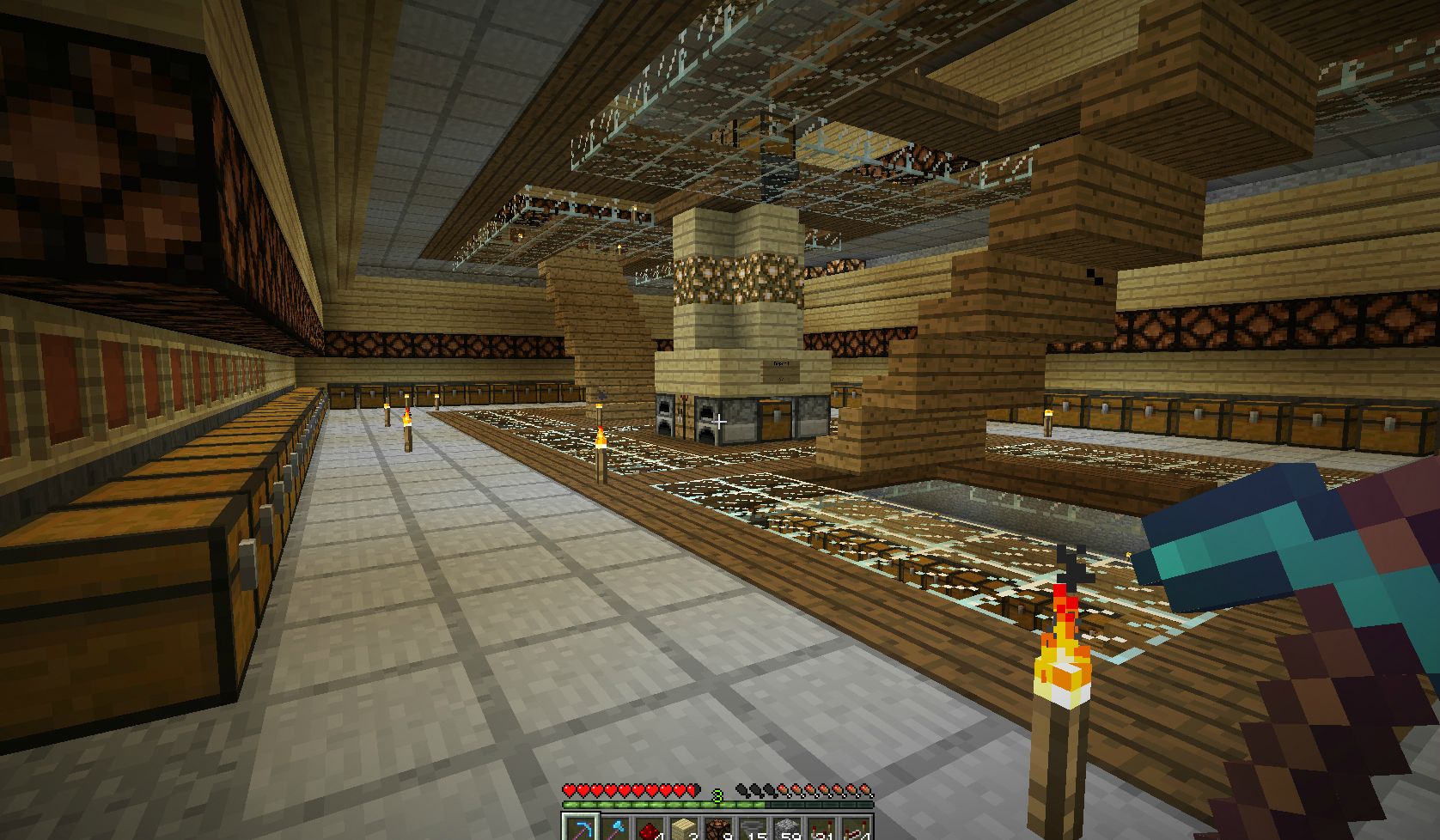 There are several deposit points, as in the screenshot above in the center of the floor.

To keep the tiles apart from each other (as overflow protection) I alternate between two tiles:

In the lower level of this tile only on the third floor I need five hoppers. The second floor has four hoppers there and the first floor has only three hoppers. This is so I can decrease the height by one block. For example the supply line for the third level is on the same height as the main chest on the second floor.

Other tile in third level: 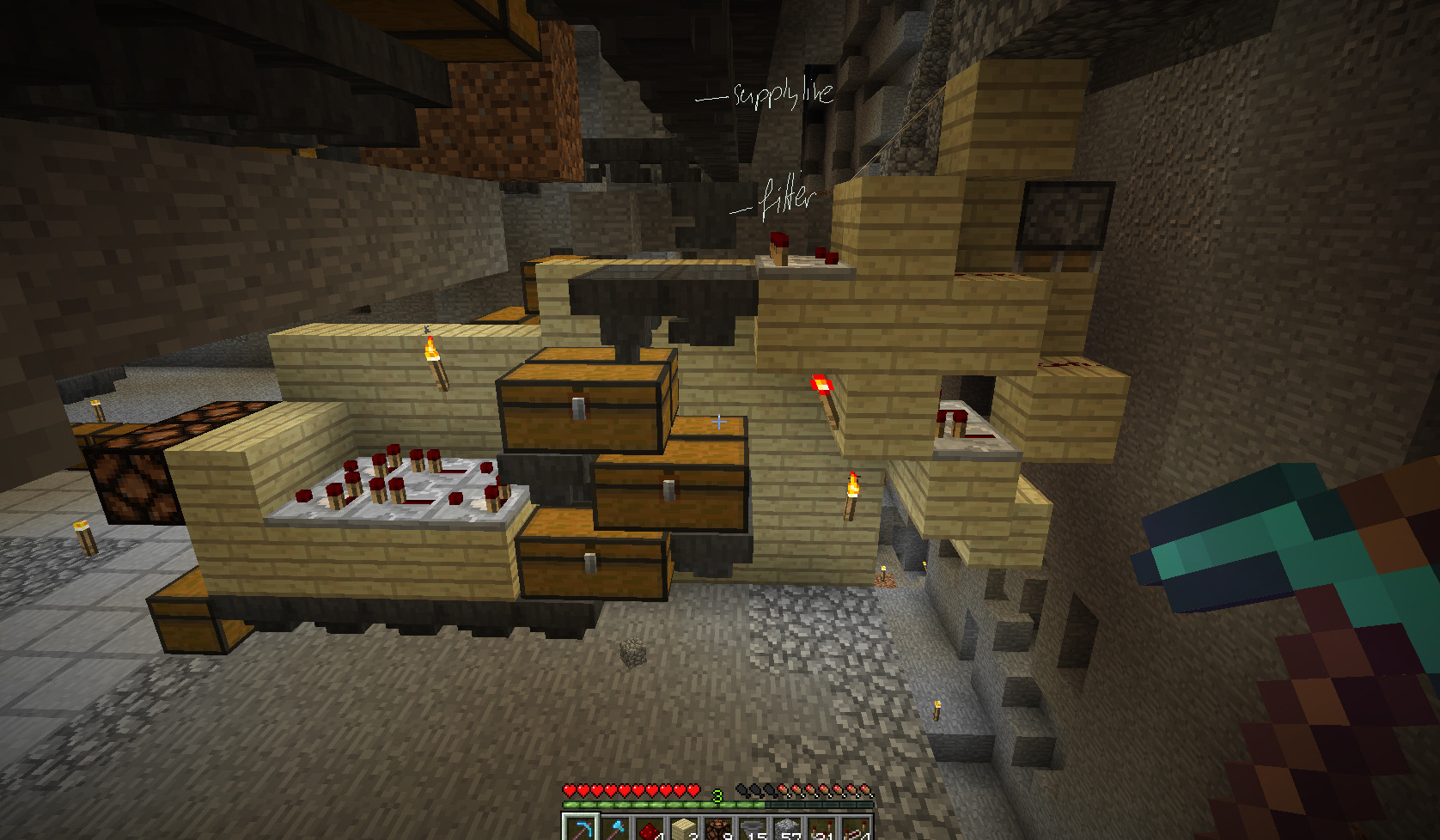 I forgot to add the filter hopper on this second tile in this screenshot. 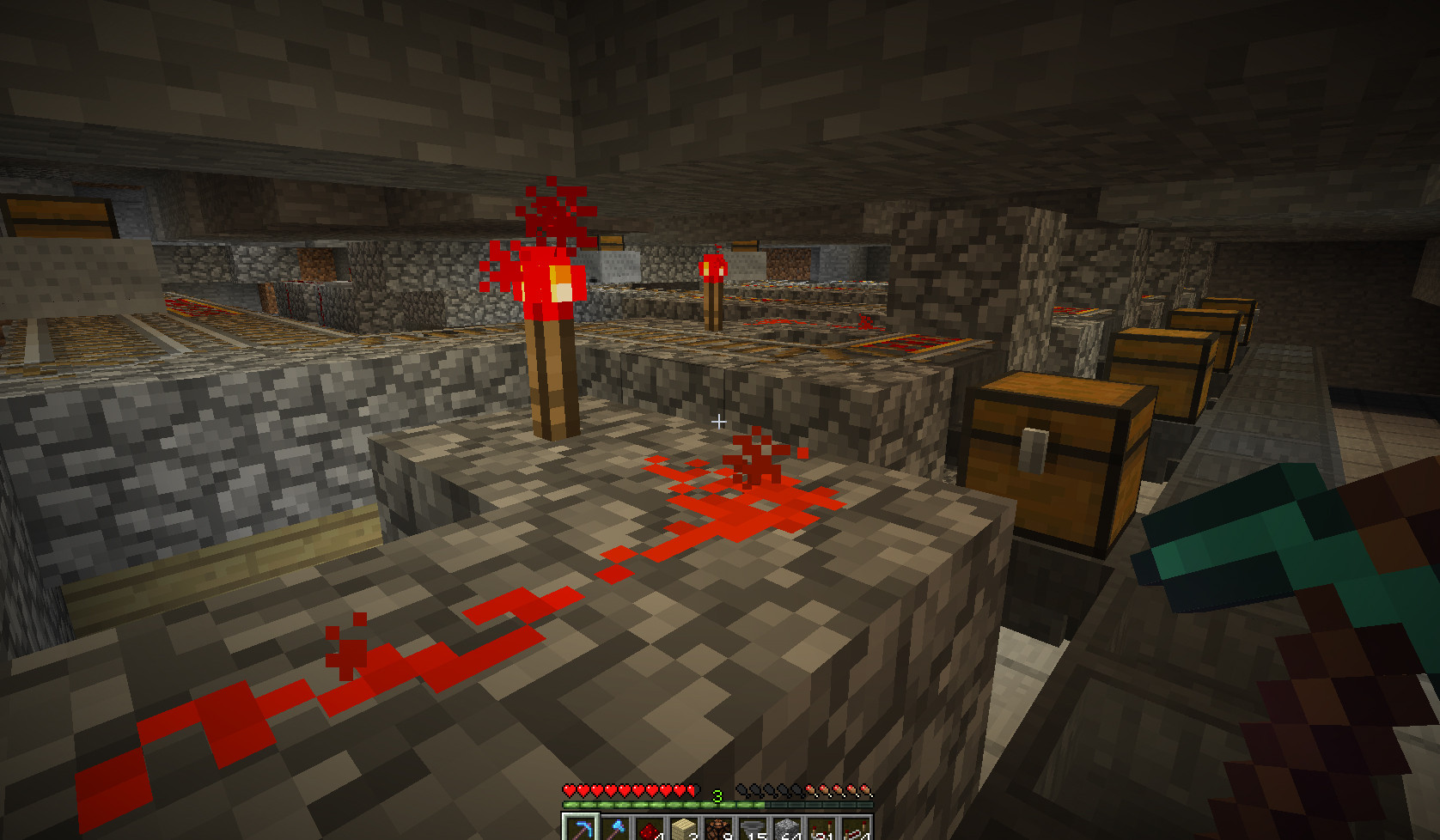 All stuff from my farms, (mob, wheat, melon, sugar canes) gets delivered here, as well as all stuff that is deposited in the chests on the floors and processed items from the automatic smelting. 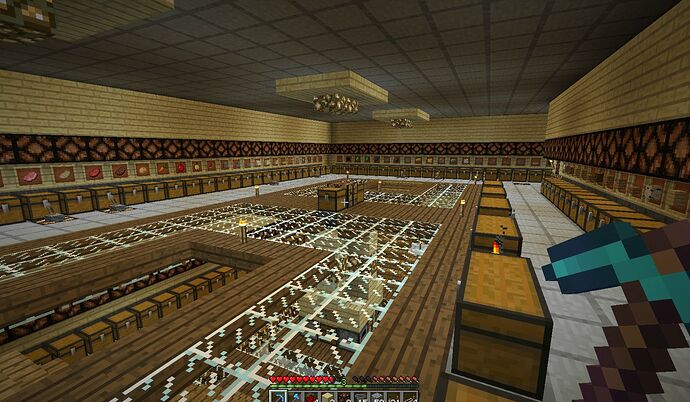 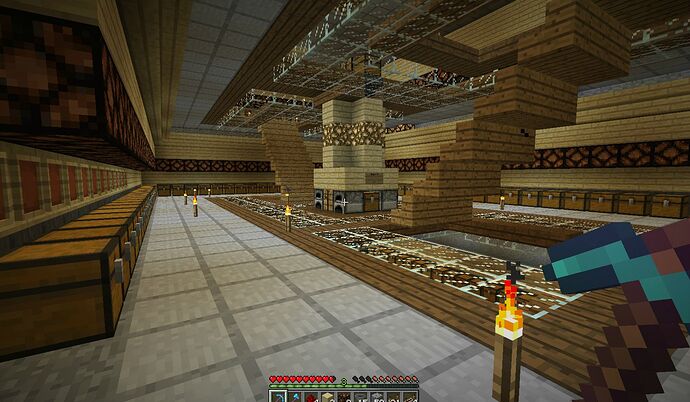 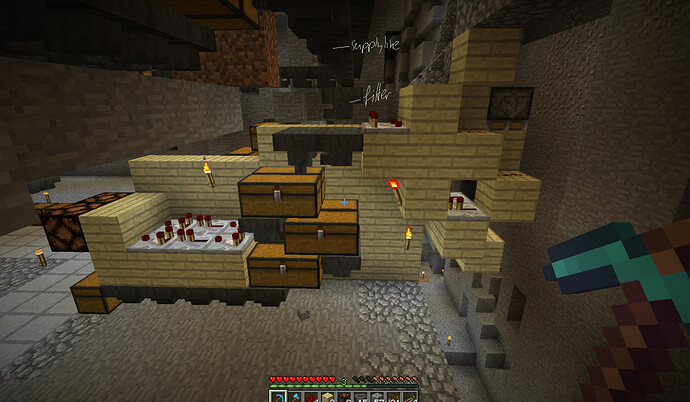 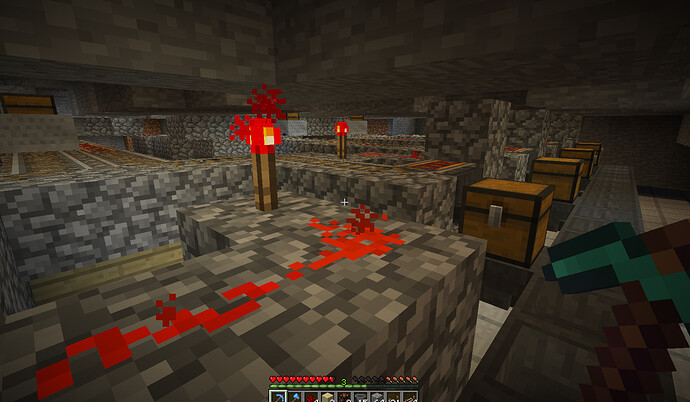