For my first Ace of Spades (1.0) video I decided to create my own take on TheLolWad’s classic Battlefield 3 trolling video, in which he ran around dropping claymores and C4 on the heads of oblivious enemies.

This is all in-game footage from random servers. Nothing was coordinated and in order to keep the gameplay as purely hilarious as possible, I didn’t tell anyone I was recording nor did I get any special favors from the enemy. I even added a bonus blooper reel at the end.

Anyway, not a whole lot else to say except enjoy the LULZ! 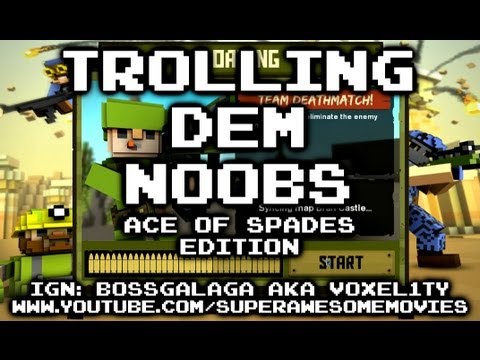 Woops, sorry…messed up the original post. Should be fixed now.

Someone made something cool out of 1.0. you have my respect sir

Someone made something cool out of 1.0. you have my respect sir

If only we had Mat^2’s version of 1.0 instead of the Jagexed out (ruined) version.

What are your PC stats? I’m assuming that recording probably already took out a lot of your FPS.

Damn… They took a sh*t on AoS. Now look at that. Everoyne running around, no teamplay, no tactics, just pure run&gun. I tell you what - get Unreal Tournament 1999 (google :)), download Infiltration 2.9 CE (free) and here you go. The game’s dead, but EVEN BOTS still offer more team play than this copy of CoD. And I run it with Intel integrated graphics card 128mb., 2.4 Ghz, 2 Gb RAM, so the requirements are pretty low.