Hi guys, this game mode would imitate the film Saving Private Ryan. For those who haven’t seen the movie here is the clip: http://www.youtube.com/watch?v=bwBkQy9CpS0
Unfortunately I can’t code Python, and I’ve made some feeble attempts on map making. Therefore it would be greatly appreciated that if the community does like it, then “those guys” (the great ones in the AoS community) would work on the project.

The Map
The greens would spawn in a boat that is in the range of the MG’s of blue. The slopes would be the only paths up to the cliff. 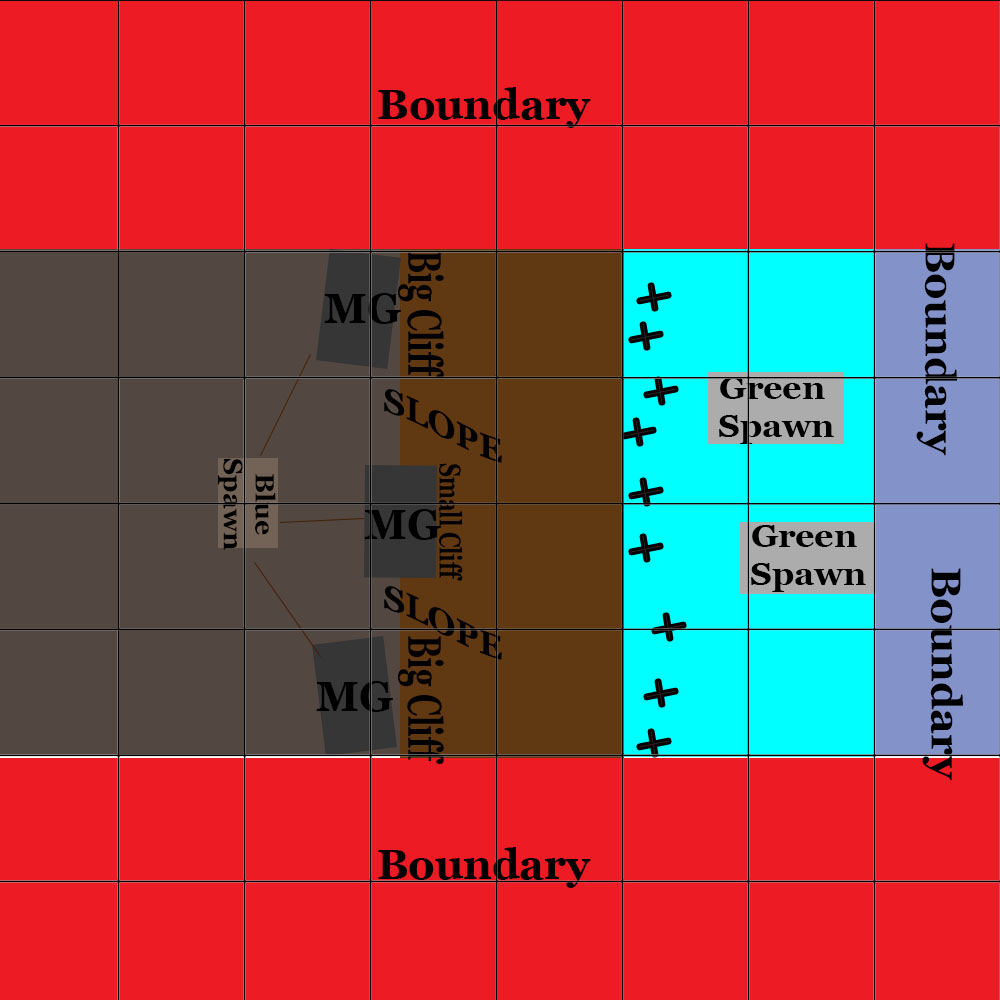 The TOW – Team Deatchmatch Combo (If Possible)
This is the ideal mode. In a match of 32, the blues would have 8-10, while the green team would have 22-24 members.
There are 2 ways to win.
The first favours the blues. Kill a certain amount(say 400?). The second way favours the greens to win. Capture the tents as shown. I also am aware that the front most tent your team has captured, you spawn a great distance behind it. 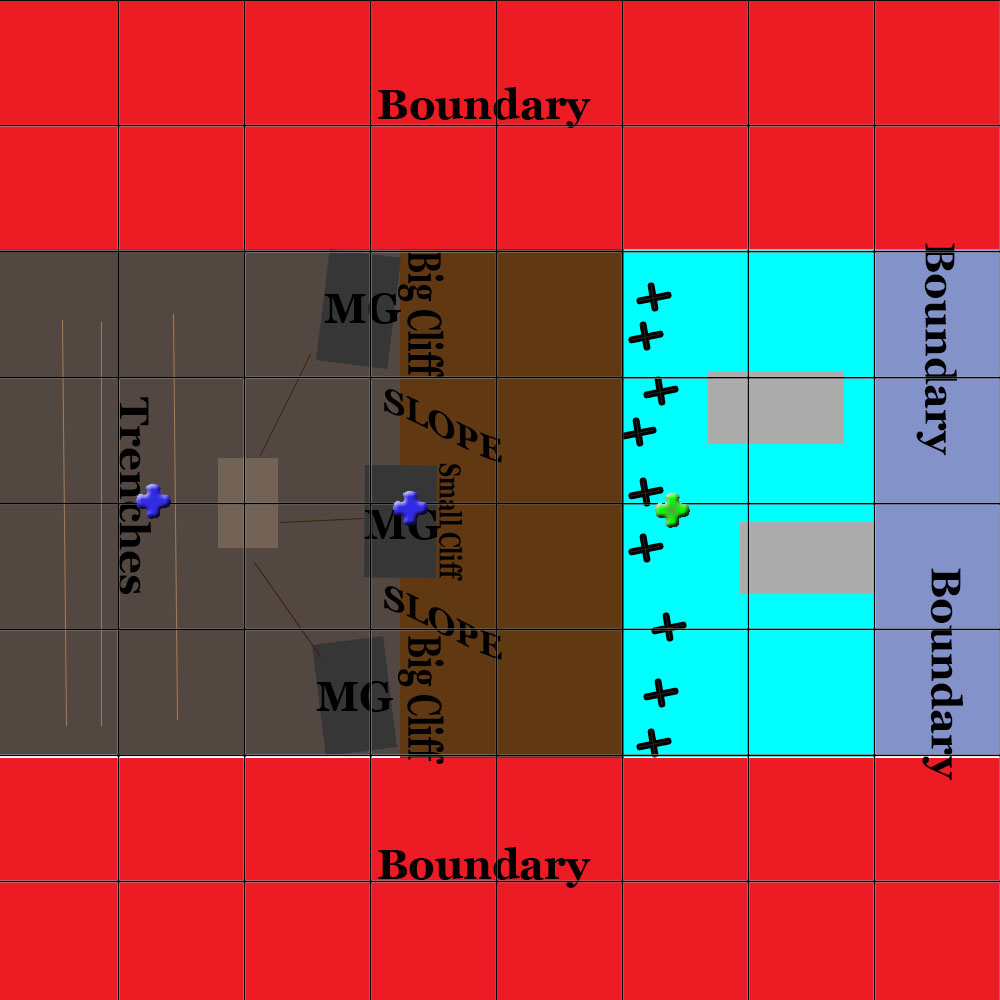 The Intel / Team Deathmatch Combo (Definitely Possible, Already in Use)
This mode would also work. Consult the 1st map for the spawn points. The intel could probably be placed right in front of the blue spawn. Once again in a match of 32, the blues would have 8-10, while the green team would have 22-24 members.

1. The Machine Gun Script
I believe it was at the map Omaha Beach that had these badboys. Now since the blocks are all indestructible, these nests won’t get destroyed. Consult the map for their placement.

2. The Boundary Script
I believe the nether server has this script. Basically you have 5 seconds to get back into the battle zone or otherwise be insta-killed. This could feature a message that says “You have # seconds to get back to the battlefield, private!” This would stop those people who like to sneak around the entire map, and essentially be a waste to the team.

3. The Crouch to Revive Script
This script is on the Sw server. Basically when you die, in the duration of your respawn timer if you get T-bagged by a teammate you instantly come back to life where you died. This would imitate the medics on the battlefield.

4. The Automatic Squad Script (Optional)
It would be ideal if each person of a group was automatically placed in a squad with a respawn time of … 8seconds? That way a team of 3 (or 4) greens will be able to cooperate together throughout the mission. Likewise a team of 3 (or 4) blues would act as a machine gun squad at a gunner nest.
One problem I’ve noticed is that when you switch teams, you don’t get placed in a squad on that team. Perhaps this could be fixed with a change in code. Otherwise just run a continuous message (every minute or so) that says “If you are not in a squad type /squad “#” (1,2 ,3 or 4).”

5. The Airstrike Script (Optional)
Airstrikes I find are quite finicky in a game mode like this. Perhaps add a Fallout airstrike script? It would occur every 10minutes and bomb the Blue bunkers? It may or may not destroy blocks?

6. The Blood Splatter Script (Optional)
I can’t remember where this script is used, but basically when you die, you splatter blood and make the blocks red around you.

Thanks for reading guys. So what do you think? 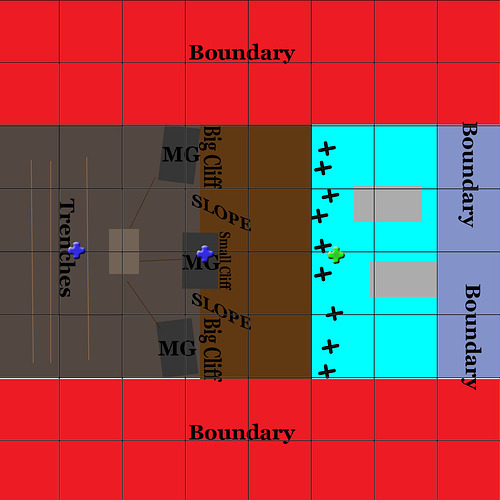 Thats a pretty gore clip…
makes me a little sad.

Other than that, nice ideas!
espacially combining your map and some scripts you saw is pretty cool.

I always support new mode developments, and this sounds like a great idea. But the thing is that people NEVER play new modes. Just look at the buildandshoot aloha servers list. Everyone plays arena, hallway, babel, pinpoint, and infiltration servers. No one ever plays new modes that has come out.

Hmm… when I have free time, I’ll make an attempt to create the map.

do a little editing the the stormwind thing
Script name: Bag4Life
Bag about 5 times on allies to revive.
Bag on enemy to heal you.
You bag to much you die.
Bag as in crouch fast.

oh yea and the blood thing is currently on aloha zombies

If someone could take the fallout script and make it so the nades fall randomly, but they don’t fall in huge numbers that would be good. Maybe if they could make it so that a nade falls randomly on the map every 2-3 seconds. It would serve as a type of mortar script.

BTW, the boundry script is on the Global War map and gamemode.

Anyone know where to get the MG script?

Sweet…Omaha beach landing. This looks interesting, though I wonder how many people want to be axis’ed with the Nazis?