this script is based on BR’s aos_replay: GitHub - BR-/aos_replay: Demo recorder/player for Ace of Spades 0.75 and 0.76

replay.py is a server-side gameplay recording implementation which bears advantages over client-side versions such as aos_replay.

recording a game for later reviewing could proof to be a powerful tool for staff. if u can record your server at all times there is no way for cheaters to hide obvious cheats such as noclip, hardaimbot and etc. and even if the cheater were to use less obvious cheats such as esp, softaimbot and etc. every instance of that will be recorded and it will just be a matter of a staff to compile, review and judge them.

one little advise:
download the playback.py script in the replays directory for easier viewing of the recordings.

This file has been truncated. show original

problem:
the recorder needs a unique player id. if a server is full the recorder is asigned an id outside what clients consider to be valid (0->31).
Furthermore if a server becomes full as the recording is active the new player who just joined is getting such an invalid player id asigned.
the clients wont process any packets directed to their invalid player id and thus the player is, allhtough connected to the server or playback, stuck in limbo as they cant join the spectator team on their side and thus incapable of joining a game or viewing the recording.
updated solution:
clients with following or a similar modification can view recordings made from replay.py:

- make player be able to join game with any local player id asigned to him by …server/playback. https://github.com/VierEck/aos-scripts/blob/main/replay.py 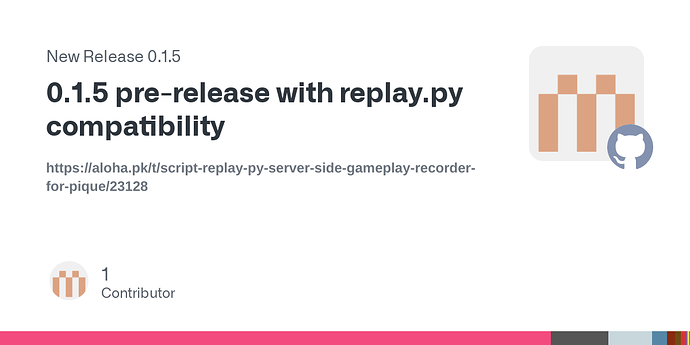 Client compatibility for replay.py Other

The issue: the recorder has to write a state_data packet at the beginning of a recording. this packet tells the client which player_id they r asigned. without this you cant view the recording. however only an Id from 0 to 31 is allowed by clients. you cant just use a player_id that is already asigned to a player. if u do, the resulting recording will make u join as that player. the client doesnt process everything the server/playback tells it to do such as walking. so you cant spectate the pla…