Server Gameplay
The Aloha Public Server a strict pvp server. This means that you can kill anyone anywhere and take their stuff. So until you have secured a plot of land and locked others out you may want to build very far away and keep your valuables hidden (There is no dynmap for this reason). 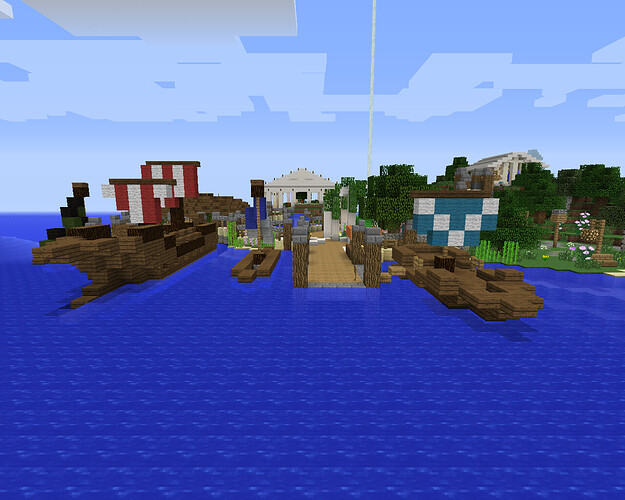 1280×1024 295 KB
Greetings Everyone, that means bird, coconut, human, or fairy. The public server will be officially open this friday at 6pm est.
A few things that you should know.

[details=Click for details]/region flag {region name} {flag} {bool, message}
Allows players to set a flag to a region some flags don’t use true or false
/region claim {name}
Claims a region that is selected and charges 800,000 in $
To select a region type //wand and right click at one end of the region you wish to select and left click at the other end to
set the end points it will then select in a square be sure to select a 80x80 plot of land in order to max out the plot region
claim then do //expand 60 up and //expand 80 down to select a 80x80x80 cuboid which is the maximum you may claim
/spawn
Teleports you to spawn there is a charge fee if successful there is a 10 second tp wait time so make sure you can’t be moved or attacked in that time
/rules
Displays all the rules
/motd
Displays the motd
/list
Lists players that are online
/helpop {message}
Send a message to all staff
/help
lists commands and help to them
- essentials.worth
/worth
Tells the player the worth of the item
/warp {Warpname}
lists all the warps a player may go to usage /warp {warpname}
Offlimit warps will be removed via permissions
Does charge money
/time
Tells the current time of the server
/suicide
allows suicide in case player is stuck or trapped in understandable territory
/sethome
allows a player to set a home Does charge money

/seen {player}
When was this player last seen?
/pay {player}
Pays a player with money from your balance
/sell
Sells the selected item to the server
/me
Kinda obvious
/mail {player} {message}
Sends a message that will be received in the players inbox
/ignore
To mute those annoying bugs, mods and up will bypass the ignore block
/home
Goes to your set home
/report <Player/!/*>

Fuck yea. But nether hubs seem pointless if we’re all out to kill each other x’D

Fuck yea. But nether hubs seem pointless if we’re all out to kill each other x’D

I have something planned for that too

Sorry for the late reply

I’ll have a public announcement going up with a much more nicer thread. I have a ton of hings I’m juggling like Fsom archery, project magic etc :(.

Not you!!! Don’t trash our server!

Lets make aloha pk server a gta server ! guns plugin is very easy to set up lol . And there can be ranks like prankster gangster ( lol ) , which unlock special stuff . They have to be purchased by players by donating as usual . The money gonna help you improve the server

Didn’t the crew and friends server sort of replaced the idea of a public aloha server?

if the aloha mc server becomes a modded server or a PVP Server i won’t even gonna bother trying. PVP isn’t that fun and OVERLY MODDED stuff isn’t fun too. if there is something, the Server will be ever more dead thand ever if we ever try one of those options. just stick to the regular vanilla, i don’t understand why you guys like PVP so much.