NOTE: I could not find a format, so I improvised 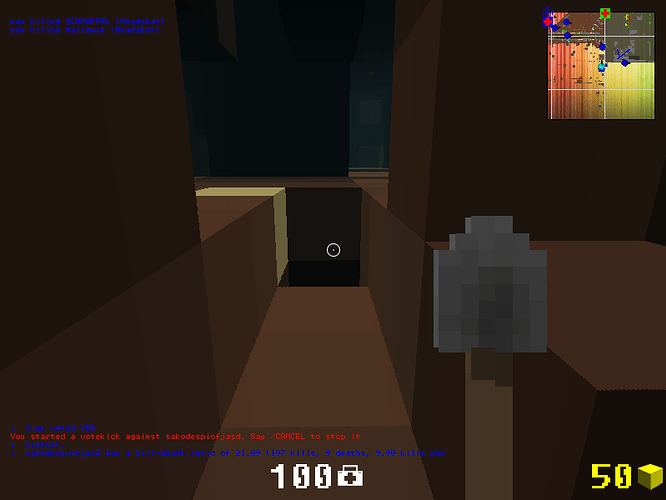 The kills per minute can sometimes go crazy after map change and that ratio is possible.

I agree. I was there in the match tommy3244 described and can verify that it was in the middle of the match. Everyone was trying to vote kick this one guy and I follow suit after seeing his KDR and kills-per-minute (you can see that I voted at the top of the chat). And while it may have been a glitch, this guy was SPAMMING the kill log with kills, and not by killing the same person either. It was literally
Sakodespiofjasd killed X
Sakodespiofjasd killed X
Over and over! Not to mention he was skyrocketing up the leader boards impossibly fast! If the image isn’t proof enough (the kills-per-minute value can be dismissed as a glitch and you can’t see Sako’s kill spam in the kill log either) then I suggest you at least keep an eye on him.
Many thanks!

Hmmm this is not enough proof by itself for a ban, but it is enough proof to warrent an alert put on his ip (for myself). Ill dig through my logs for his ip and add it so I get beeped when ever it ends up in an alert.

Edit: Alert added for his ip. I’f I’m on I’ll hear it if he sets off any hacking alerts.