Hearts of iron 4 is a WW2 (and WW1) grand-strategy simulator. That is, take the role of Stalin, Hitler, Roosevelt, Churchill or a hundred different leaders, and create your path to victory in the great wars.

It’s pretty easy to get into but pretty difficult to get ‘good’. (still working on it!)

Anyways, for those of you who know or want to know more you can post here and I’ll answer questions. I’d be down for getting a multiplayer game going with people.

looks appealing. reminds me of Risk - is it like that?

of these expansions/add-ons, what's necessary to play a normal game without being inconvenienced/limited? 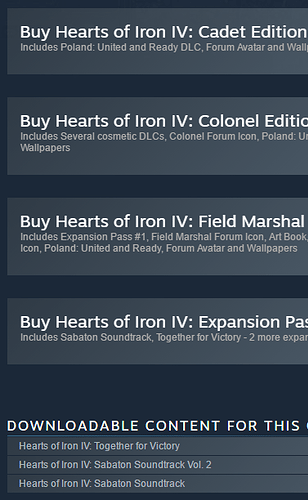 looks appealing. reminds me of Risk - is it like that?

of these expansions/add-ons, what’s necessary to play a normal game without being inconvenienced/limited?

hope this helps you.

I only have the base game, and have only ever played singleplayer. The latest patch really made the game good, prior to that I stuck mainly to mods on the steam page.

The only downside is the game is expensive unless you get it on deal. And, yeah it’s kinda like risk. It’s also very easy to play multiplayer through steam I think - any interest? Could do like a 2-3 hour game at middle-speed I believe

Hearts of Iron 2 is way better and easier to get into, and not to mention cheaper.

I haven’t tried it, but I’m sure it’s a great game too - I’ll look into trying it. But, is multiplayer so easy to set up with it?

Used to play it on my dad’s PC. It was really fun, just wanted to pick it up and saw this. Thanks for making me feel nostalgic yet again.

Just played a game as China, man what an easy game with near infinite manpower!