I have some tips for those who are votekicking and accusing players for aimbotting/griefing.
Before starting a votekick, please follow these steps.
(Originally posted by Tobi9sc, input/formatting by Reki.)

How to Votekick:
Votekicking command: type directly into the chat.

Player ID # for votekicks (especially those who have no name):

Griefers: If you think you’re onto a griefer, but aren’t too sure, this provides some backup verification.

Aimbots: If you’re very sure that someone’s an aimbot, do the following steps.

In any case, you can cancel a votekick that you have started.

Very nice! However I fear that people won’t read it, the ratio of people who play AND are on the forums is low, You also didn’t cover false votekicks, which is a big thing, well atleast I think so haven’t played in a long time. Very nice overall, I like it!

I had an accuracy of 100% that lasted for a while…Around 13 to 18 kills and without dying which makes my ratio a 18.00. That doesn’t mean I’m hacking though. You cannot be extremely certain just by stats. Try experimenting by hiding somewhere behind the wall, hidden from view etc.

Nope. I’ve kept an accuracy of 132 for over 3 rounds with SMG. The only way to know for sure someone is hacking is to watch them. Those just help, 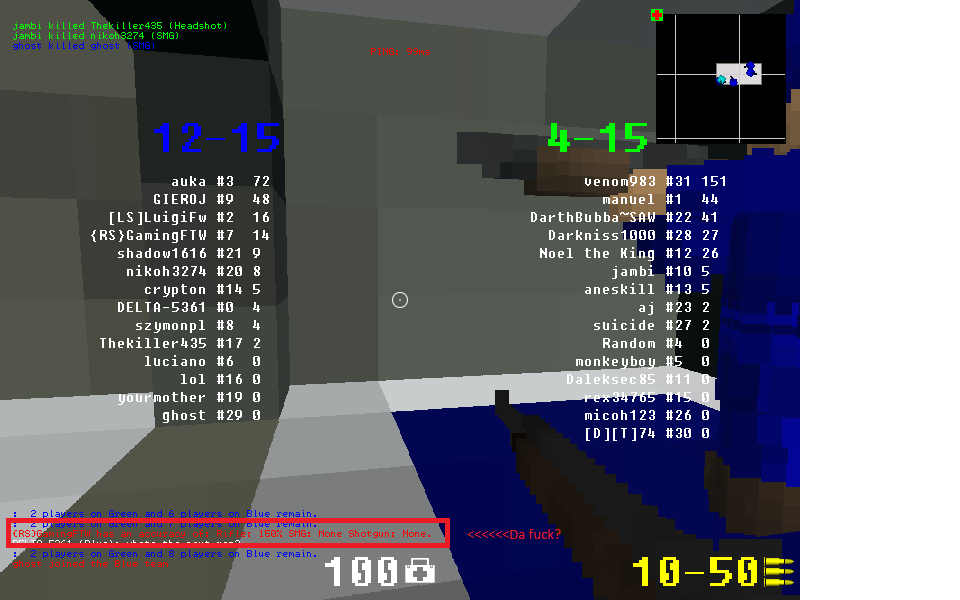 the accuracy script is not 100% accurate! don’t always rely on it!

a high ratio doesn’t necessarily mean someone is cheating either. good legit players get high ratios, too.

Buuut Im guessing over 500%+ of accuracy is definately hacking.

Maybe izzy is true cause one guy told me about it, he said that you can get 50% accuracy for having instant headshot for Rifle. (if you are not lagging)

Buuut Im guessing over 500%+ of accuracy is definately hacking.

Some of them are in 350%+.But, Thanks for feedback guys! I updated it!

But you have to be abit aware of people who have shottys becuase the shotty is the gun that you can get the highest accuracy for close range, because once O had a shotty on arena,Avstorage and I killed 3people with one burst of fire of shotty.

Not a bad post, but there are some things here that I’d like to tweak around a bit.

With the author’s permission (tobi9sc), I’d like to modify a few lines, then set the topic sticky.

@Ryu, yeah you’re right, forgot to add that.
@Reki, Ok sure you can.

I started by making small edits, but eventually I found myself adding lots of things and formatting everything.
So I apologize, Tobi9sc, if things don’t look the same as it originally was.

Reki, you almost have a thousand more posts than I do.

Anyways, nice guide! I read it prior to Reki’s editing.

high accuracy is not necessarily hacking just to clear things up. i was moderating TOW a while ago got an aimbot flag saying a guy had 1064% accuracy. i’m 100% sure he wasn’t aimbotting as his ratio was only 0.81 and he had died like 20 times. so no, high accuracy is not always a definite aimbot. TBQH i only check accuracy to check whether my aimbot suspicions are reasonable or not. only evidence i actually use is from 075spectate, from normal spectating checking for snaps, and from people admitting to aimbotting in the chat.