The Riflvolver is actlualy a shorter name For Rifle Revolver.
I’ve been working on this for quite a while now and now i finaly hit the point where i need to make a reload animation for it.
it’s gonna take a while but i’ll manage to make it. I also plan to make the barrel rotate everytime a shot is fired.
Maybe add a scope if ppl ask about it but for now i’m too lazy to even think about making one lol. 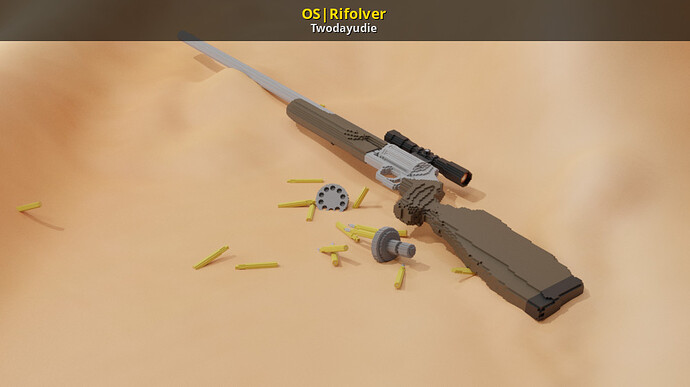 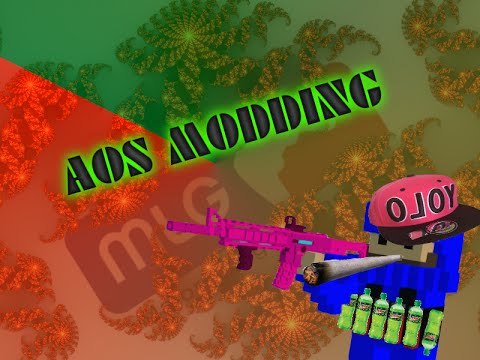 Secondly, I’d say that your model does look nice and all, and you put lots of work into it, but unfortunately openspades is frustrating because using that much detail kind of looks ugly in openGL but will look just fine in sw renderer… So I’d recommend thickening some of the single cubed areas like around the chamber as it looks too detailed. Great job otherwise though

It’ll be a huge challenge (trust me, I’ve tried…) to make it so that the chamber rotates every time you fire and reloading will be a pain in the butt. Lol!

Great job though, so beautiful <3 B)

I gotta say, since this is a Rifle, i watched numerous videos of it and the recoil on this looks really small. with a regular revolver i can understand that the recoil is big but with a thing like that with a stock… it just removes the entire recoil. The guy that tested the rifle said : there is basicly no recoil. i’ll still make a kickback animation cause having it like that doesn’t looks fancy.
about OpenGL yea i thougt about that and that why i got skin tweaking to do. for the barrel rotation, i figure you gotta put a vector that makes it so the middle of the barrel will be the rotation point so them you can apply the simple rotate command. well that’s what i think.

Still debating if i put a scope or not tho

Edit, the only problem i encounter right now is the Bullet ejection. I need to find a way to stop it in the codes cause having a Revolver with bullet ejection doesn’T look too great

Oh yeah, my bad. Forgot to consider the stock. Lol!

Yeah, I think you’re right about using a vector to apply a rotating anim.
A scope? Nah, I think it’d look nice with an ironsight

There is already an iron sight on it tho.
I could make a scope version and a Iron sight version tho

I’ve never made a scoped gun before and noticed it’s particularly difficult. I hope you know how to make a proper scope as I need your help on it if you don’t mind

Also, about your bullet projection issue: Hmmm. It isn’t in the typical rifle view.as Maybe it’s in the basicviewweapon.as?

For the Scope I 'll make it like a sight but i’ll create another script and remove the sights models.
Let me explain with a line of code.

This is the script to Render the Gun ATM. I moved every models in slab6 so the gun looks just like any normal one and it avoids making a diffrent line of script for each one

Now with this script i’ll give a lower scale for the scope considering that the scope will be highly more detailed then the actual weapon.
What i could try to do is make a scope that isn’t gonna be the scope you look into when you scope in but then when you scope in the other scope appears. A bit like what Paratrooper did with his rifle. but i don’T feel like it.
I still think i should make the actual weapon way more detailed but i don’T have the power of will to do that + Slab6 glitches everything my model is longer then 130 voxels or so which is why the Current Rifle has multiple models

I hope that this helped you and just a little head up if you put the same scale as the weapon matrix, the 2 models should be the same size. that’s what i did in my shotgun mod and it worked flawlessly

Alright, hats off to you! Thanks, that really helps

Thanks! As is said, This project will take a while considering all the coding stuff i gotta do for it but once I learned how to animate i’ll be able to update my shotgun and make even more cool mods

Thanks! As is said, This project will take a while considering all the coding stuff i gotta do for it but once I learned how to animate i’ll be able to update my shotgun and make even more cool mods

Have you considered making both an option for a scope or iron sight? Maybe making two different downloads for each or adding those files in to download?

yes i did and i’ll probably do that. Scopes seems to take huge chunks in the screen and need to be highly detailed if you don’t want it to look out of place so… Option for both is gonna be a thing.

Little bump from 4 years ago. Been wondering what to do during my quarantine and … lets just say I regrabbed this project. Along with the help of some friends of mine (Monstarules and Regice202), I started learning a bit more about AngelScript and how to code animations. Been working on the models as well, changing the color, redefining the Cylinder. Might still change the model a little bit, ain’t quite satisfied with it but hey, I’ve made this thing 4 years ago, I can’t expect it to be perfect.

On this note, I don’t know if this project will ever see a release date, I work on it depending of how i’m feeling so… don’t get your hopes up lol.

For anyone lurking the forum, look at my first post, the mod is done and i’ve put a gamebanana link for download