So I consider this to be a legitimate complaint and something that should have been changed a long time ago. Arena maps are about team work as well as being a walking platform of death. With green teams private chat team work is easy because green stands out against the white, blue, and red that is spammed in the chat. Blue team is at a huge disadvantage and using the blue teams private chat is legitimately painful to look at, much less understand. 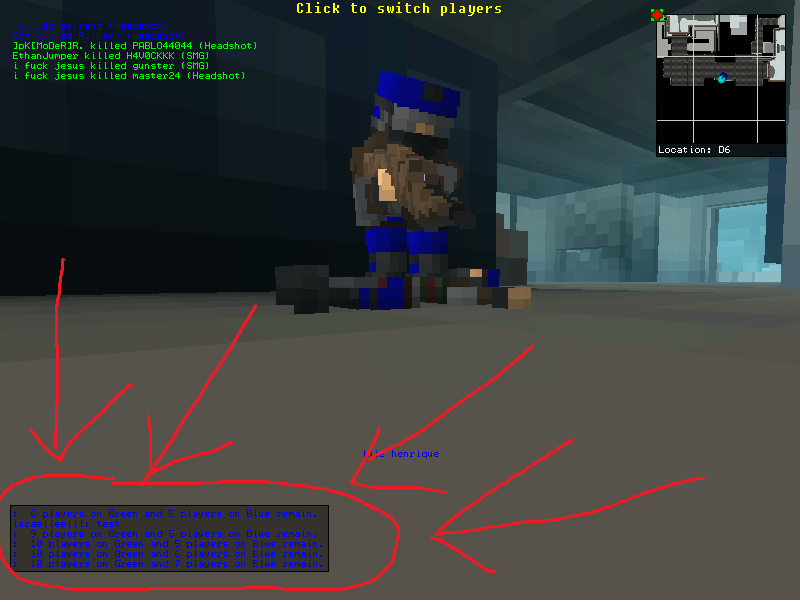 I’m not sure if its possible without changing the team color but I could be wrong. I’ll ask some admins who know more about AoS protocols and coding.

Thank you. If it can’t be helped then oh well. It’s just been a pet peeve of mine.

Thank you. If it can’t be helped then oh well. It’s just been a pet peeve of mine.

no problem. I made a thread in the admin section.

This problem has been looked at long ago as its been a problem for a long time.

There is no fix sorry to tell you.

I think it might be possible, I’ll look into it.

Yeah… would be nice if this was fixed.

I agree, even a lighter shade of blue would be much better. Yellow is also another color that I would suggest

Bump before this is forgotten and becomes a necro. (:

It’d probably be possible to mod pyspades to send only default white text to clients with a tag like “(team)” before the message. Not sure we want to do that though :?

Changed spammy messages to red on arena all maps, other servers pending restart.

Changed spammy messages to red on arena all maps, other servers pending restart.

It’s ironic because this thread was started in 2015